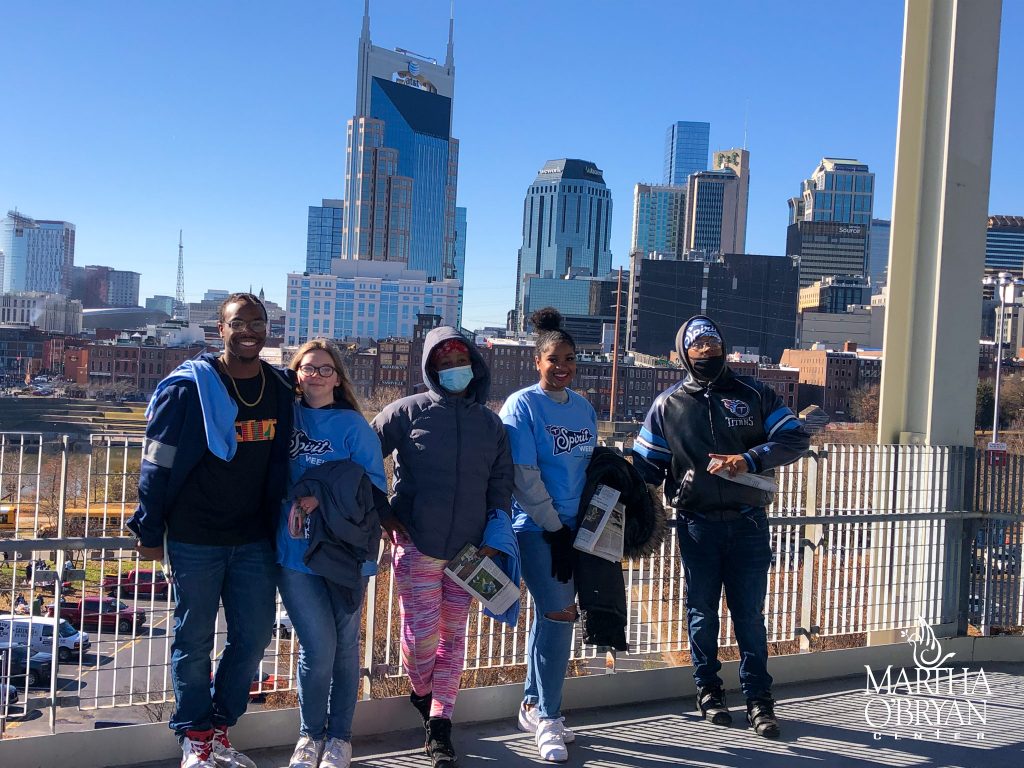 Do you remember being in school and working on a fun assignment with your classmates? By the end of the project, each of you probably hoped for the ultimate recognition of your collaborative success, such as a TV spot on the local news, or, maybe the local legendary professional football team would somehow acknowledge your collective talent. In hopeful young eyes, anything seems possible. As we grow up, however, the likelihood of something like that happening belies all probability—at least, as we’ve come to know it.

And yet, the implausible is exactly what happened for one group of students at Stratford STEM Magnet School through our Academic Student Union (ASU), Top Floor.

Any sports fan today will tell you the transformation of the Tennessee Titans these past few seasons into the prevailing powerhouse they are now has been nothing short of inspirational. And this season is no exception, as the Titans are set to play the Cincinatti Bengals this Saturday in the NFL playoffs leading up to the Big Game. It was the shared fascination with the Titans’ drive this season between teacher and students which also served as inspiration for a special creative project at Top Floor.

Being in Music City Has Its Advantages

Beloved Top Floor Coordinator Marvin Muhammad, celebrating his 10th year with us, led students to begin recording their own album over the summer. Needless to say, enthusiasm for the project was high, as was student participation, which included the collective talents of students Destin, Makiya, Kennedy, Martel, Mikel, Erran, and Jeremiah. Thanks to a special partnership between the Country Music Hall of Fame, Stratford STEM Magnet and Martha O’Bryan, students at Top Floor have direct access to their own music recording studio on site. In fact, you can listen to their song, “615” (named after the Middle Tennessee area code) here below via SoundCloud.

It’s Time to Titan Up!

One student in particular, Destin, became truly inspired with their creation and mentioned to Top Floor staffers that he knew someone at the Titans who might be interested. Never ones to discourage this sort of outreach, the Top Floor staff figured it couldn’t hurt to have him ask. Fortunately for all, Destin’s instincts about their project proved to be spot on.

The Titans were not only interested, according to Adam Yockey, the Senior Director of ASU and Post Directive Iniatives at Martha O’Bryan, “[The Titans] used video clips from a music video that the students and one of our AmeriCorps members, Chris Clark, worked on with us last summer and added them to Titans’ footage.”

Students were then invited to the next Titans home game, where they were able to see their song and video played on the Jumbotron in front of 60,000 fans. Check out the footage of their music video airing in the stadium below.

The icing on the cake came with a big Titans win that afternoon. Congratulations go to Marvin Muhammed, Adam Yockey and the entire Top Floor staff and student body for this monumental recognition of your collective achievements!

We would like to thank the Tennessee Titans for uplifting our students and showing them anything is possible when you put your mind to it. We also congratulate you on making this year’s playoffs with a home field advantage and wish you the best of luck in this Saturday’s playoff game on your way to secure an AFC Championship and, hopefully, an historic win at the Big Game!